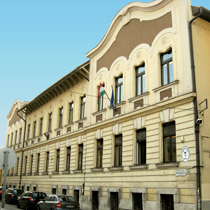 Our school is a reputable institution with an impressive history. Class instruction began in 1904 as a higher elementary school for girls and boys. It was very popular in Budafok as well as the surrounding area.

During the Second World War classes were interrupted for several months. When classes resumed in 1945 it became an 8 grade primary school.

The school has taken advantages of the advancements in public education becoming an English Section Primary School in 1978. The curriculum was further expanded with the advanced level teaching of Computer Studies in the 1998/1999 school year. On the 90th anniversary of its founding the school’s name changed to Kossuth Lajos Primary School.

During its 100 years of operation the school has continued to develop in meeting the needs of its students and the community.

Though our school is over 100 years old it has continued to grow and change while staying true to its purpose of educating and preparing students for life. One of the results of this continuous improvement in education was the introduction of Hungarian–English bilingual teaching in the 2004/2005 school year.

Major milestones in more than 100 years:

September 12, 1904 Teaching begins in the Hungarian Royal State School For Boys and Girls
November 8 Official Opening Ceremonies of the school

1907-1908 The main part of the building/school is constructed

1908-1909 Courses are offered for boys and girls separately

September, 1944 School is closed due to WWII

1945-48
Public schools are being closed down gradually
Teaching begins in the 8 grade primary school in the 1st and 5th classes, students are still put in groups according to gender: girls study in Budafok Square Primary School, boys study in Kossuth Lajos Primary School

1984 The new building is opened for classes

1990
Spanish, Latin and German are taught as a second foreign language instead of Russian
The first School Fund Gala is organised with performances by students

1993
The last class to have studied Russian leaves the school
A Halloween party is organized
We launch competitions for the schools of our district: Environmental Protection and English Pronunciation Contests

1996
Beginning with the first grade, computer skills education is introduced. A special classroom for Computer Science is installed in the loft
A Computer Science Competition is started for the schools of the district
Local History Studies courses are initiated

1999
The school joins the quality-control system. A Pedagogical Programme is created and introduced
A Swedish-English-Hungarian partnership is established by means of a tender
A partnership with the Mesztegnyő Primary School is formed

2004
The Hungarian-English bilingual programme is launched
The 100th anniversary of the school is celebrated by the unveiling of a memorial plaque, a gala festival, organising meetings and competitions, publishing a memorial book